Analysis of a Munition-like Item Retrieved from the North Sea

In 2010, unknown objects were found in a fish basket on the quay of the fishing harbour of Oostende. They were collected at the Belgian Marine Environmental Management Section in Ostend... 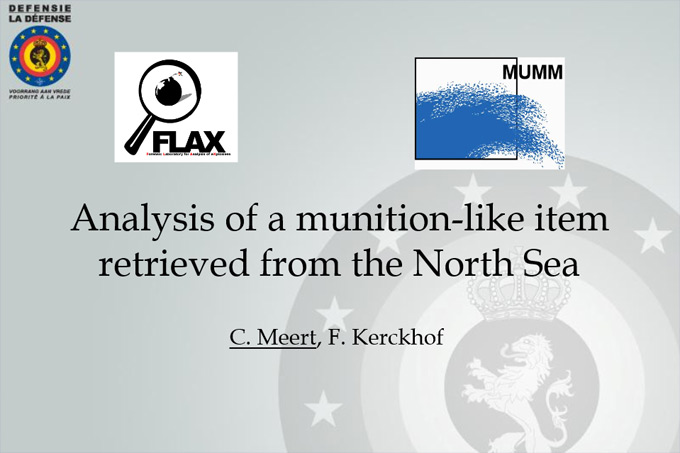 In spring 2010, several unknown objects were found in a fish basket on the quay of the fishing harbour of Oostende. They were collected at the Belgian Marine Environmental Management Section in Ostend. They were obviously fished by Belgian fishermen and an analysis of the marine fauna growing on and in the objects pointed to an origin of southern European waters such as the eastern Channel or Irish Sea. Because of the faint almond odour, it was thought the items were related to ambergris.

Ambergris is a solid, waxy substance of a dull grey or blackish colour produced in the digestive system of sperm whales. Freshly produced ambergris has a marine, faecal odour. However, as it ages, it is reported to acquire a sweet earthy scent.

A closer inspection of the inner part of the material, however, showed the presence of metal parts. This observation suggested that the found material could consist of a WWII shell dumped in the North Sea. A sample was send to the chemistry department of the Royal Military Academy.

Aliquots of the sample were taken at different parts of the shell. Thermal analysis by Differential Scanning Calorimetry showed the presence of nitrocellulose/nitroglycerine. This was confirmed by HPLC/UV.