Dispersion of Critical Substances from Dumped Ammunition in Marine Sediments on Paardenmarktsite, Belgium

After World War I large amounts of munitions were left behind on Belgian territory. In 1919 the Belgian government decided to dump the ammunition on a shallow submerged sand flat. 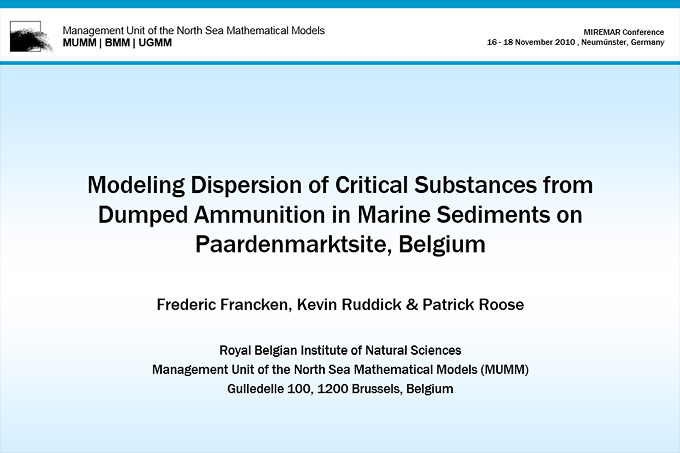 After World War I large amounts of munitions were left behind on Belgian territory. In 1919 the Belgian government decided to dump the ammunition on a shallow submerged sand flat called "Paardenmarkt", situated 1.5 km offshore from the Belgian coast.

The estimated 35.000 ton of dumped material is now covered by a layer of recent muddy sediments, reaching to a maximum of 4 meters thick. The condition of the ammunition is unknown and managers need to know what would happen if chemicals start to leak from the shells. Three groups of chemicals were identified as hazardous and selected for further modelling: Yperite, CLARK I & II and the abundant TNT.

A three-dimensional model of bottom sediments and overlaying water column was constructed and applied to simulate the dispersion by dissolution, diffusion, advection and hydrolysis of the toxic chemicals leaking from a shell. The time and length scales of contamination of the marine environment were thus established.

Results indicate that, due to slow diffusion over the time scale for hydrolysis, leaking Yperite will contaminate only a few cm of sediments. The time scale of pollution is in the order of one year and longer. For CLARK I & II no final non-toxic degradation product was identified and so contamination is persistent indefinitely. After 10 years a contaminated sphere with a 0.5 m radius is formed, which triples after 100 years. Due to the low dissolution rate and slow diffusion, TNT will contaminate for hundreds of years, whereas length scales indicate an acute contamination in the order of 10 cm. These simulations consider only physico-chemical processes and do not take account of possible bioaccumulation. They do, however, indicate that sampling strategies on sediment covered dump sites for monitoring purposes need to be very accurate.